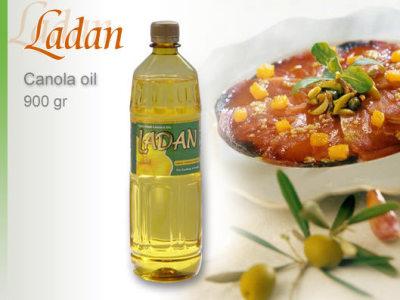 Canola oil is intermediate among the vegetable oils in polyunsaturated fatty acid (PUFA) content. It contains appreciably higher levels of PUFA than palm oil or olive oil but lower levels of PUFA than corn oil, cottonseed oil, safflower oil, soybean oil and sunflower oil. Interest in PUFA stems from their role as essential fatty acids and their effectiveness in lowering plasma cholesterol level, a major risk factor in coronary heart disease. Linoleic acid has long been recognized as an essential fatty acid. Animals, including humans, are unable to synthesize it and, therefore, it is required in their diets. However, they are able to convert linoleic acid to arachidonic acid and other members of the omega-6 family of fatty acids.

Arachidonic acid is important in membrane structures and is the starting material for the synthesis of “hormone-like” substances.  Recent studies have indicated that alpha-linolenic acid and other members of the omega-3 family of fatty acids likewise are essential. Like, linoleic acid, linolenic acid can be converted to other members of the omega-3 family, namely, EPA and DHA. DHA is a major constituent of lipids in the brain and the retina of the eye. Canola oil contains an appreciable amount (11%) of linolenic acid. Hence, there is a very favorable balance (approx. 2:1) between linoleic acid (omega-6 PUFA) and linolenic acid (omega-3 PUFA) in canola oil.
The effectiveness of canola oil in reducing plasma total and LDL cholesterol levels and the observation that it may alter clotting activity and protect against cardiac arrhythmias indicate a beneficial role for canola oil as part of a nutritious diet.